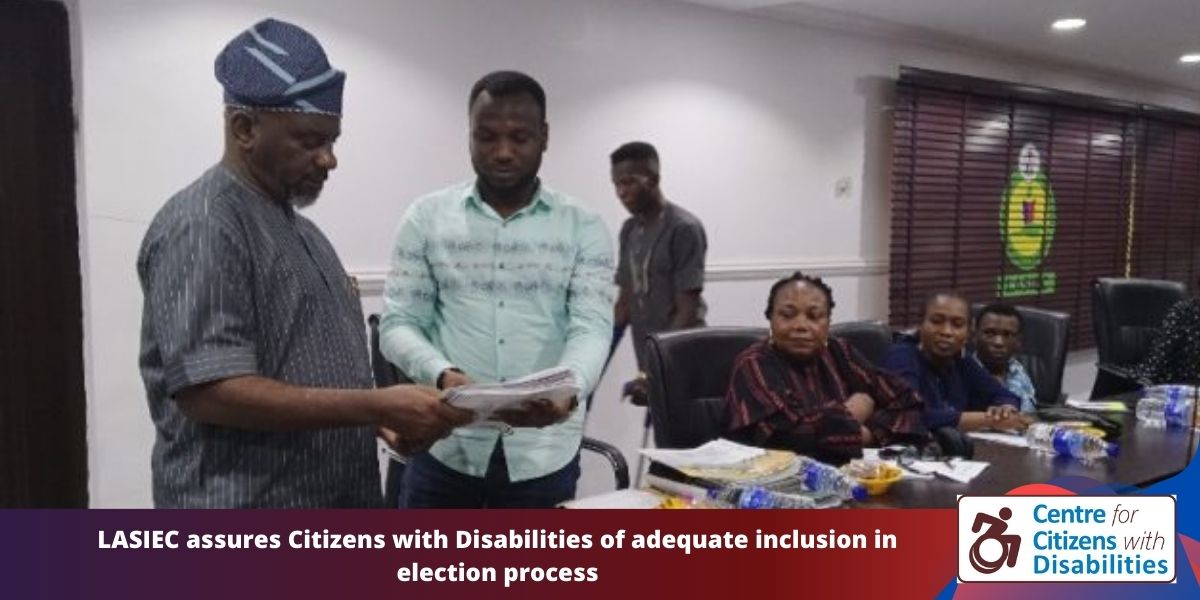 The Lagos State Independent Electoral Commission (LASIEC), has assured the Centre for Citizens with Disability (CCD) that its strategic plans for election will accommodate activities by the group.

Dr. Olayiwole Onasanya, Permanent Secretary of LASIEC, made the remark while addressing the group whose members visited the Commission on Thursday at Birrel Avenue, Sabo, Yaba.

The News Agency of Nigeria reports that the group, led by Mr Peter Ekemini, Programme Officer of the CCD, had Mrs Franca Anaedum, General Secretary, Joint National Association of Persons with Persons for Disabilities, (JONAPWD), Lagos State, on the visiting team.

Onasanya disclosed that sensitisation is in progress by the Commission to ensure that all persons with special needs are part of the decision-making process.

“Part of our strategic plans is to make sure that all citizens, irrespective of your level, economic status or requirements should have a voice in electing their government.

“In 2023, May 29, a new government will be coming on board at all levels, and we really want persons with disabilities to be part of the election because by that you’ll be recognised.

“And when government is making decisions, it will also know that some special people who were part of the process that brought them to positions need to be empowered.

“The issue of polling boots been sited across gutter as pointed out would be looked into, we are going to make sure that it is sited in areas very accessible,” he added.

In same vein, Mrs Eniola Adesina, Head, Feudal Education, said that the Commission factors persons with disability into every programme and administratively, have a high percentage of persons that fall into that category as members of staff.

Adesina declared that programmes have already been outlined for the elections which captured and would address issues of persons with disability in the Commission’s day-to-day activities and beyond the elections.

“LASIEC work with persons with disabilities, a desk is already in place for this group and the idea is to handle any related issue as it were, so they are part and parcel of us.

“Special training is given to ad-hoc personnel, and in the manual, a section is devoted to persons with disability on how they should be treated on election days.

“And it is clearly stated there that such persons must be given priority, even the blind or shortsighted person are also captured in the manual,” she added.

Ekemini disclosed that CCD is running a programme, called ‘Access to Justice and Political Participation of Persons with Disabilities’, and urged the Commission to improve on its election sensitisation for the group.

“There should be signs for the deaf in polling units to give them a sense of belonging and to ensure that they perform their voting rights effectively on election days.

“And that is the idea we are driving at to create more awareness on the need for persons with disabilities to participate effectively as others,” he added.

NAN reports that CCD presented some documents to the Commission which included a poster, ‘Support the Implementation of Disability Act Right’